Matthew Ronay: The Door is Open

Kunsthalle Lingen is very proud to present the first solo exhibition by the American artist Matthew Ronay (born 1976 in Louisville, lives in New York) in a German institution.

Matthew Ronay’s sculptural works are like mythological visions that embrace the mystical and strange without losing the ability to impact the viewer on a fundamentally human level. Ronay works with humble materials such as wood, papier mâché and fabric to set forth oppositions such as male/female, life/death, light/darkness, and reality/unreality. Both formally and in regards to content, Ronay’s artistic universe is informed by the spirituality and design of non-western cultures, as well as the cosmology of science fiction. His interest in rites and ceremony is expressed in his works that often have talisman-like features. Oftentimes Ronay ‘activates’ his works by performing at his exhibitions, where he transfers his energy to the works and infuses them with vitality.

Inspired by the psychoanalytic Carl Jung and the mythologist Joseph Cambell, Ronay works with his intuition in order to reach an expression that reaches us at a fundamental and collective unconscious level. His enigmatic sculptures and stagings engender a strange remembrance of something primal and instinctively original that lies deeply buried in the consciousness of modern man.

This exhibition presents the installation In and Out and In and Out, Again  (2013) and sculptures and objects that form the work It Comes in Waves (2011). 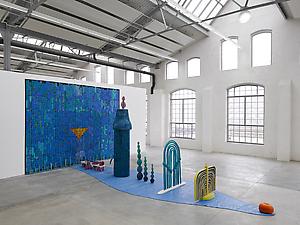