Matthew Ritchie’s 18-month residency at the Institute of Contemporary Art Boston continues with the opening of Ritchie's contribution to the Sandra and Gerald Fineberg Art Wall on February 28th.

The aim of Ritchie’s overall project is to expand the space of painting and drawing into six collaborative disciplines: architecture, city planning, video, performance, theater, and music—all while still retaining properties unique to painting and drawing.

This work will continue his exploration of the possibilities, limitations, and collaborative capabilities of various media. Here, painting escapes its traditional confines both dimensionally—by extending across the art wall to the adjacent bay of windows—as well as materially—through the inclusion of sound. The imagery, like his Dewey Square mural, will be composed of dark, gestural and diagrammatic lines on a pale background. The drawing on the wall will become more and more colorful as it reaches the windows, where the drawing will erupt with complexity and color.

Organized by Jenelle Porter, Mannion Family Senior Curator, Remanence includes a large-scale installation on the Sandra and Gerald Fineberg Art Wall at the ICA; a residency with the ICA Teen Arts Council; and multiple performances. Among these are Remanence: The Long Count/The Long Game from a collaborative work Ritchie created with, among others, Bryce and Aaron Dessner of The National, and Kim and Kelley Deal of The Breeders, and two new musical performances, Monstrance and Remonstrance, which will both take place March 29 on site at the ICA and at the nearby Chapel of Our Lady of Good Voyage.

The title Remanence: Salt and Light references both science and scripture. “Remanence” is a coined expression that integrates the words memory, remnant, and resonance and is scientifically defined as the magnetization remaining in a material after the magnetic field has been removed. Salt and light are metaphors in the Sermon on the Mount (Matthew 5:13-16), a passage cited by John Winthrop, first governor of the Massachusetts Bay Colony, as he stated his intention to build “a city upon a hill.” Ritchie’s project visualizes the connections between the history of Boston and of the United States; science, religion and politics; and the ICA building, which, in Ritchie’s opinion, is itself a beacon on the bay.

Biography:
Matthew Ritchie’s installations, which integrate painting, wall drawings, light boxes, performance, sculpture, and projections, are investigations of the idea of information explored through science, architecture, history and the dynamics of culture, defined equally by their range and their lyrical visual language. In 2001, Time magazine listed Ritchie as one of 100 innovators for the new millennium, for exploring “the unthinkable or the not-yet-thought.” His work has been shown in numerous exhibitions worldwide, including the Whitney Biennial, the Sydney Biennial, the Sao Paulo Biennial, the Venice Architecture Biennale, the Seville Biennale, and the Havana Biennale, and is in the collections of the Museum of Modern Art, Institute of Contemporary Art/Boston, Guggenheim Museum, Whitney Museum of American Art, San Francisco Museum of Modern Art, and other institutions worldwide, including a permanent large-scale installation at the Massachusetts Institute of Technology.

We are grateful to all of the sponsors and institutions who made Matthew Ritchie's residency at the ICA possible.

Additional support provided, in part, by Jean-François and Nathalie Ducrest.

Mural in Dewey Square, Rose F. Kennedy Greenway This temporary mural on the Greenway is brought to you by the Rose Kennedy Greenway Conservancy and the ICA/Boston and was made possible by the Massachusetts Department of Transportation, the Boston Art Commission, and the City of Boston. The mural was funded through private donations and the generous support of Tricia O’Neill & Signs Unique, Jodi & Hal Hess, Patricia La Valley & Geoff Hargadon, and Mark & Marie Schwartz.

The Teen Arts Council is generously sponsored by the Bank of America Charitable Foundation and Blue Cross Blue Shield of Massachusetts.Fast Forward is supported in part by The Angell Foundation and the Massachusetts Cultural Council YouthReach program. 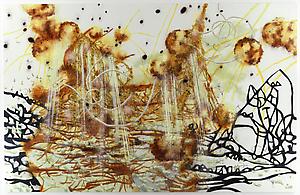