“It is hard work to listen, though we probably spend more time doing it than almost anything else we do. But it is even harder work to be attentive to how we listen and this, I suppose, is what I’ve been doing for the past 15 years.”
-Sharon Hayes, “There’s so much I want to say to you”

Andrea Rosen Gallery is pleased to announce Fingernails on a blackboard, Sharon Hayes’ first project with the gallery and an eagerly anticipated exhibition at Gallery 2. She has had numerous institutional exhibitions in New York; including her 2012 survey There’s so much I want to say to you at the Whitney Museum of American Art.

The exhibition expands and builds upon an established line of inquiry in Hayes’ work through her active mining of the intersection between history, politics and speech. Both the title of the exhibition and a new body of work, Fingernails on a black board investigate how voice acts as the embodied medium of speech. Hayes takes the 1977 National Women’s Conference in Houston, TX as a historical point of departure. The 1977 conference was a result of an executive order to assess the status of women in light of the United Nations proclaiming 1975 as International Women’s Year; New York Congresswoman Bella Abzug was appointed to head the conference. Following the conference, an extension was granted for the ratification of the Equal Rights Amendment. Having only been ratified by 35 states by the 1982 deadline, the amendment has never been passed.

In the exhibition, Hayes reproduces a banner hung on the stage of the National Women’s Conference. Approximating the scale of the text of the actual banner, six-foot high panels become a painted translation of voice literally shouting the word “WOMAN” and nearly exceeding the size of the gallery space. The scale and media of this particular work reflect Hayes’ engagement with both the context of the gallery and the specificity of the physical space. A new video work uses the transcript of a meeting between politician Bella Abzug and a vocal coach in which both work at neutralizing Abzug's regional accent and softening her tone. The work addresses the political consequences of gender and specific limits of power in the specter of public speech.

“It raises the question: Could you actually live in this country for eight years having to listen to her voice?”
-Megan Garber quoting Tucker Carlson on Hillary Clinton, Columbia Journalism Review, 2008

Hayes engages the present moment by calling upon the past. Through its material animation, Hayes shows how history embeds itself in collective memory and gets played out in current political situations. Viewers are asked to traverse the boundary between public and private, recognizing themselves as beholden to and actors in historical realities. By isolating and re-contextualizing the word WOMAN, Hayes’ exhibition points to the precariousness of the term in this time and place and raises questions about the complexity of collective affiliations around gender now.

For media inquiries contact: Lance Brewer at l.brewer@rosengallery.com or Jen Joy at jen@suttonpr.com

Sharon Hayes: There's So Much I Want to Say to You

In her performances, videos, and installations, Sharon Hayes (b. 1970) explores the nexus between politics, history, speech, and desire. Her works modify or appropriate the language and tools of political dissent, creating unexpected affinities between important historical events and the present. Highlighted in this volume is the video installation Symbionese Liberation Army (SLA) Screeds #13, 16, 20 & 29 (2003)—a work in which Hayes memorized the famous taped speeches by Patty Hearst and her kidnappers, the leftist radical group the Symbionese Liberation Army, and then reads them to an audience who corrects her mistakes. It is in these slippages between memory and history that the meaning of Hayes's work resides. This book also includes a group of new site-specific works that addresses the Whitney's role in the historic development of process-based, performative art and its engagement with politics that took place in the late 1960s and early 1970s. 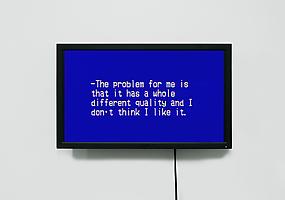 Fingernails on a blackboard: Bella