Andrea Rosen Gallery is pleased to present Continuous Surfaces at Gallery 2. The exhibition features new work by Sara Cwynar, Lukas Geronimas, Josh Reames, and Cole Sayer. Writing in Artforum, Alexander Provan proposed that “every era has its interface, and every interface determines how we relate to the world.” If the late 20th century was defined by the graphical user interface made popular by personal computers, the early 21st century is marked by the proliferation of touch screens, which mediate increasingly broad swaths of everyday life. Touch screen devices like phones and tablet computers represent a radically new kind of surface, one that is both physically flat and thin, but experientially depthless.

Working across a range of media, the artists in the exhibition touch on how we might perceive a space of infinite and ever changing content, laminated to a surface defined by its attempt to recede into a flat plane. What might this sensation look like, and how can media invented centuries ago continue to adapt to the world in which we live?

Sara Cwynar presents three works, each consisting of images assembled through collage and re-photography from objects and found photographs, a process of intervention and manipulation that ultimately disrupts the smooth surface and the perspective of the stock image. Embodying her interest in the way that images – from old magazines, postcards, catalogues – morph, accumulate, endure and evolve in meaning and value over time, Cwynar’s work involves a constant archiving and re-presentation of collected visual materials. Highlighted here is the idea that images spanning the realms of the analog and the internet never die, but their powers to trick and seduce do wane and transform over time.

Lukas Geronimas’ work proposes support and content as a spectrum, rather than a binary proposition. In this exhibition, Geronimas shows a life-size wood and plaster bathtub, adorned with drawings carved into the surface and then covered in India ink and graphite powder. The work is a sumptuously crafted object, yet immediately evokes the automatic scrawls and doodles that often mark school desks and bathroom stalls. With drawings wrapping and undulating around the work, drawing and material or content and support become indistinguishable from one another.

Consciously employing commonly used artistic techniques, such as trompe l'oeil, action painting, graphic design, screen printing, and rudimentary drawing, Josh Reames’ paintings break down hierarchies of mark-making, art historical references, computer graphics, labels, and everyday objects in a manner drawn from the non-objective “infinite scroll” of images and information we encounter in both the online and real world. All incident exists on one plane and Reames’ work has a borderless quality, its surface seemingly holding the potential to extend infinitely.

Cole Sayer’s paintings act as a bridge between the digital and the physical. Each work begins as meticulously constructed, 3D models. These renderings are then executed in acrylic paint and overlaid with enlarged drawings painted with a vinyl paint that alternately reinforces the illusionistic space of the painting and calls to attention the physical reality of the paintings’ two-dimensional linen support. Sayer often utilizes found 3D models culled from the internet. Through his work, these models undergo a transformative process where a physical object that has been translated into digital data and distributed online gets reconstituted back into a material object. Sayer’s works speak to the way in which the world operates with a perpetual feedback loop so that the digital world can increasingly resemble the physical, and the physical more and more imitates the digital.

Sara Cwynar (b. 1984) received degrees from York University, Toronto and the University of British Columbia, Vancouver. She is currently enrolled in the MFA program at Yale University. Cwynar has an upcoming exhibition at Retrospective in Hudson, NY. Recent solo exhibitions have taken place at Foxy Production, New York; Rosenwald-Wolf Gallery at The University of the Arts, Philadelphia; and Foam Photography Museum, Amsterdam. Her work is in the collections of the Museum of Modern Art, New York and the Dallas Museum of Art. Her second artist book, Kitsch Encyclopedia, was published in winter 2014 and her third book, Pictures of Pictures was published by Printed Matter in fall 2014. Cwynar lives and works in New York.

This exhibition is organized by Cory Nomura. 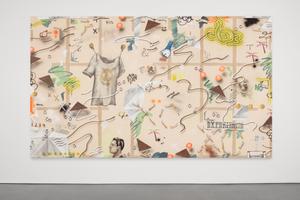